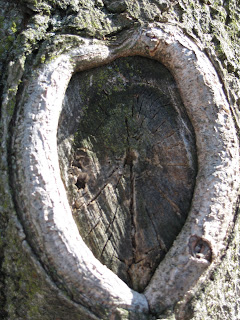 During a discussion about preparing for the High Holidays at my synagogue recently I made the vow to experience the season in relationship to the feminine, and especially mother, aspect of God. We had been discussing the nature of the holidays and I shared that I found the services performative in the extreme and frankly resented the idea that someone else, a religious professional, needed to do my praying for me. Our new rabbi, Max Weiss, in response to my comment said that the holidays are really ABOUT the religious professionals. The form harkens back to temple days when the priest did engage in the rituals on behalf of the community and these days of awe offered the priest an opportunity to demonstrate his humility to the community as well as to God, to petition that the community not be punished for his lapses, and to ask for forgiveness for any ways in which he failed the community. Put into this context I was able to feel more kindly to what I experience as a dissonant yearly charade of obeisance to God in the aspect I have spent a great deal of my life deconstructing: the harsh judge, the capricious, angry, jealous patriarch. Because I believe our words and actions create our reality I feel strongly about not wanting to add to the strength of an image of God that I find deforming of human potential to do good, be happy and love one another. I make every effort to operate from compassion and not from fear, which is the underlying message of the High Holiday God sealing in his big book who will live and who will die.
As we were wrapping up our discussion of “Hineni,” which in our synagogue is recited dramatically by the cantor as she makes her way from the back of the hall to the bima, I asked the question, “What would this prayer mean if we experienced God as mother?” One of my fellow discussants said emphatically, “It would be completely unnecessary!” Her remark, like the rabbi’s, helped me see why my negative reaction to the services is so strong. The aspect of the Divine with whom I cultivate a relationship is speaking the words on the first page of the prayer book from Exodus Rabbah 19.4 “The Holy One does not reject a single creature. Rather, all are acceptable to God. The gates are open at all times, and all who wish may enter.” I grew up in the Roman Catholic faith and my mother died when I was quite young so I believe I took in the harshness of the patriarchal God who, I was told, ‘took those to himself who he most loved.” My character was formed by my loss and the deviant sentiment offered as comfort to a child whose mother suffers horribly and then dies. My conversion to Judaism was sparked by the need to argue with God, to object, to protest. I had no doubt of the existence of the Creative Source from which all things flow, that was obvious to me as a child. What I gained in Judaism is the understanding of the covenantal relationship in which God manifests through the words and acts of humans, not from some cloudy place in the sky.
My practice as a child was to leave my body whenever possible, theoretically because it was both the near occasion of sin and something that needed to be cast off before one can join the Divine. Really it was because it is in the body that we experience pain, both physical and emotional. The pain of my loss overwhelmed me and revealed the flaws in the God I had been taught. I lived deeply in my imagination and while I benefited from learning to dwell there, something also was lost. Without being fully embodied I lost the capacity for empathy, the capacity for relationship.
Judaism doesn’t perfectly teach its adherents to live fully embodied lives but the emphasis on our actions, on tzedakah as well as prayer, that avodah means both work and worship, and, especially the making of space for dissent as a practice of faith, all these allow the body to be present. My choice, because it is a choice, is to embody the ethic of care that calls for truth but with compassion, justice informed by generosity and worship that is alive, joyful and embodied. If this is the God we live, this is the God who manifests. This is God, the Mother, with whom life can be messy, imperfect, where food is prayer and touch is prayer and sitting under a tree and watching the light on the leaves is prayer where praise for Her every manifestation is the prayer that enlivens Her and us. My teshuvah is then a return to conscious awareness of deep gratitude for all that is, especially the body through which I experience all that is.
I will join my community tonight for kol nidre with more understanding and empathy for our religious professionals. Tomorrow, I will fast from food in order to come closer to appreciating the miracle of nourishment when I resume eating at sundown with friends. But I will spend the day with my feet on the earth, my eyes to the sky watching the sun filter through the leaves. I will spend time with my Mother and pray to learn how to manifest Her in the coming year in joy, for the highest good, embodied. For God, the Mother, not only are the gates open but so are Her arms, ready to enfold us in joy for our simply being.
Posted by Pat B Allen at 8:46 AM No comments:

The Joy of Movement 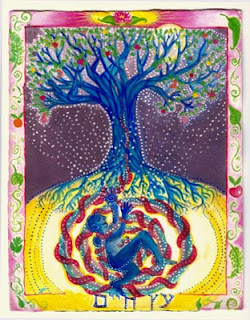 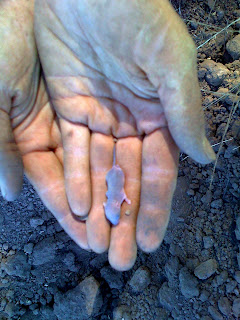