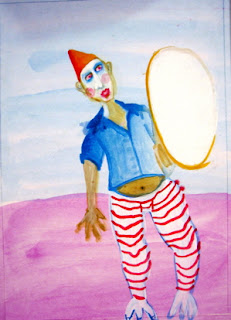 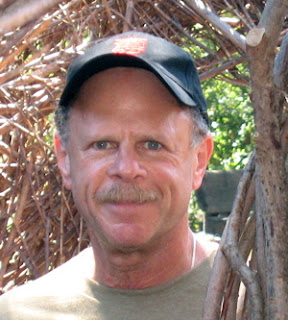 3. Technology was involved. Although even a slightly dyslexic chimp could probably successfully make a film using a Mac with IMovie, the fact that we both(John and me, not the chimp) feel competent and comfortable using the editing program is an achievement.
4. I feel like this isn't a one-time thing, I think I could be endlessly fascinated making films with John about all sorts of things indefinitely and that sort of takes my breath away. Talk about a birthday gift!
Last but not least, the film has enabled me embrace being The Fool, which if you aren't familiar with the Fool's symbolic meaning: "The Fool represents the essence of what we are: whole, healthy and without fear...that spirit so often expressed and experienced in those states of wonder, awe, curiosity and anticipation." (from The Tarot handbook, by Angeles Arriens)
Now to push my personal envelope with technology, I am going to add a clip from the film, which premiered September 22, 2007 at the Third Annual Oak Park International Film Festival.
ENJOY!
Posted by Pat B Allen at 1:25 PM

I can't wait to see the entire film. Not sure why you conjure up an image of Mable Dodge Luhan in Santa Fe from the twenties. Maybe it is the lounging in the backyard effect or maybe you are emanating writer's energy.
Hope you are having a wonderful day and my present to you is to post this blog!!!
Lots of love.

Northeast Prep school...
6th grade dance in the gym...
October 13, 9pm...
parent pick up...
expecting Dick Cheneys...
expecting Dick Cehenys...
Snap, M. Night Shyamalan presents himself...
whole, healthy and without fear..
attractive, lithe, strong...
The night becomes still and quiet while I attend to tribe members of artmakers basking in the light of the cosmos.. me and my honey becomez star lit honeybeez and buzzzzzz...
We feel the senzual call and response creative folk groove & buzzz to.
Honeybeez, M. Night, The Fool,
Wonder, Awe, Curiosity, Anticipation and Hard Work. Life is definately amazzzzing..
Love your movie clip, love to buzzz.. Good luck with your new endeavor as a buzz worthy film maker. Hey, if you ever want to make an underwater film I have a camera and am a certified advanced open water diver!!!!
-Robin V

Can you show more of your film to those of us who are out here in the ether?

Art Is a Way of Knowing found its way to me a few weeks ago, at the perfect time in my life, as these things so often happen. I could type for hours about how wonderful it all is, of course.(Not to diminish that: it really is a wonderful book and it's been a great help at this particular moment in my life.)

But I don't want to waste your time that way, so I'll just allow myself this one little bit of flattery.

Reading it feels like this: I'm struggling up a steep, difficult mountain path, wondering if it's worth it. Then on a distant ridge I see someone struggling up a similar path, maybe higher up than I am? They turn, see me, and we wave. Then back to climbing, but encouraged!